Decision to donate is a ‘silver lining’ for Michigan family ‘It’s been the thing that’s kept me going,’ daughter says

“He could talk to anybody,” said his daughter, Kimberly. “He was just friendly with everybody. He could take a walk and find two new best friends.”

In fact, Marty Townsend, who passed suddenly after a stroke 16 years ago, often did just that. Once he was gone so long the family, concerned, went out to look for him – and found him talking with two new friends at a battery shop.

Born in Iowa, Marty moved to Michigan to work for Ford Motor Company, where he later retired. He enjoyed camping and fishing and spent plenty of time fishing for walleye on Lake Erie. He also loved country music and played the steel guitar, even recording some songs that his family still listens to as a reminder of his talent. He would frequently call his children to hear stories about his grandchildren that he would then share with his co-workers.

After his retirement, Marty and his wife, Pat, spent time in Texas and Florida, and it was three days after returning from one of those trips that he suffered a sudden stroke. He went into the hospital on his birthday and passed a day later. He was only 65.

“He was here one day and gone the next,” Kimberly said. “There was no chance to say goodbye.”

There was, however, a chance to turn the family tragedy into hope for other people. A respiratory therapist, Kimberly said she understood how serious her father’s situation was, and knew that he would not recover. The decision to donate his organs and tissue was an easy one, she said.

“I thought: at least we could have some kind of silver lining here,” she added. “Maybe somebody else’s family won’t suffer the way we’re suffering. I’m glad we made the decision. It’s been the thing that’s kept me going.” 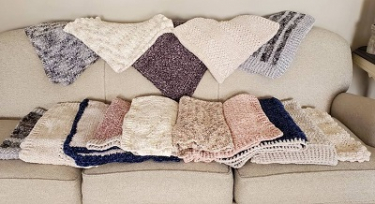 In her father’s honor, Kimberly has been making blankets to give to donor families. She recently donated 16 – one for each year since her father’s passing. She said she hopes they can provide comfort to families who are grieving their own loss.

“I thought it’d be a great thing to do, a way to pay it forward,” she said. “I’d hate to have to go through something like this again, and I know people are still going through it.”

She said her father’s sudden passing is a reminder, too, of how important it is to tell the people in your life how special they are.

“Say your words,” she said. “Always tell the people you love that you love them.”